We narrowed down our user population to the majority population of male users above the age of 65 who suffered from an above knee amputation due to dysvascular diseases like diabetes and peripheral arterial diseases who have low activity levels. This target user group was chosen since we found that advanced and innovative prosthetics were being targeted towards younger populations. This led the geriatric population to be sidelined and the majority of them were still using old prosthetics that haven't been worked on in a long time.

​We then conducted more research by looking at online forums, reading research papers, and by talking to experts in the applied physiology department. I conducted most of the user research and needs to see what aspects we could improve. We settled on working towards these following goals:

To better understand the device, we took apart the prosthetic leg and broke it down to its components; thigh, knee, tibia, and foot.

Components of a transfemoral prosthetic leg; thigh, knee, tibia, and foot
Then we proceeded to make a usability flow chart to understand how the typical user would use this prosthetic leg. 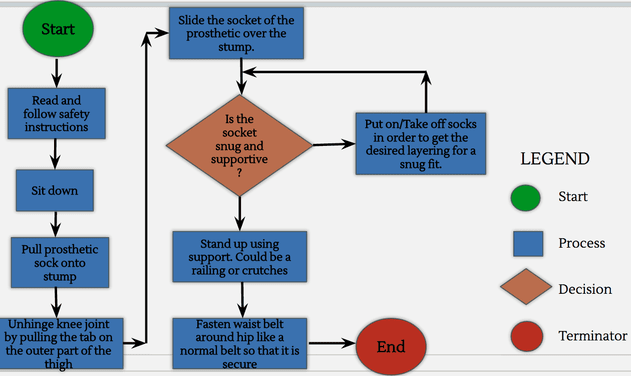 To improve the prosthetic leg, we first analyzed the strengths and weaknesses of each component and identifed potential factors of improvement. We found the limitations of the device by performing engineering analysis on the components, which allowed us to formulate ideas.

Component Matrix of all the components of the transfemoral prosthetic leg

We brainstormed and generated many ideas that could be implemented. Some areas that were focused upon included creating a more comfortable thigh, changing the joints of the knee to make it more mobile, having the tibia absorb shock, and making the foot more flexible.

Concept matrix that I created to compare different ideas for the thigh
The third stage consisted of creating crude prototypes of the best designs for each component. This resulted in inflatable thigh, shock absorbing tibia, flexible foot, and finally a knee that clicks on locking. 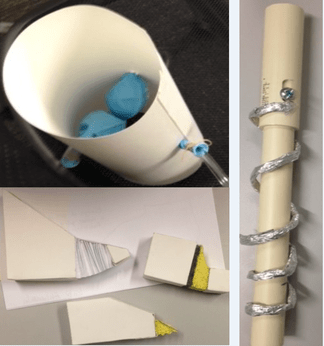 Initial prototypes of the various components. It includes an inflatable thigh, shock absorbing pylon (tibia), and a flexible foot. The prototypes were made with easily accessible materials like PVC pipes, sponges, paper, aluminum foil, etc.

The biggest aspect of this project was deciding on the correct material to use for each of the components. Each component had different requirements and our final prototypes needed to have sound engineering principles as well as contain all the necessary features that we needed. To identify the best materials, I conducted a lot of research on the different materials used for prosthetics and other similar applications. I talked to professors in the Materials Science Engineering Department to get their input and to test the materials we wanted. This allowed us to identify the best material for our purposes.
In addition to these materials, we also had to decide on the material for the knee, pylon, and foot. We conducted engineering analysis on all of these components to make sure that the prosthetic was capable of performing adequately.

After creating prototypes and obtaining feedback from various experts, including meetings I set up with professors in the Applied Physiology department, we came up with four final concepts. They included:  All of these concepts addressed our inital goals of creating a more comfortable and mobile prosthetic leg that also reduces instances of falling.

The final prototypes were made with the materials that were decided upon, 3D printed, and finally polished to look good.